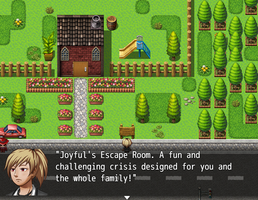 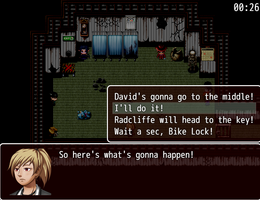 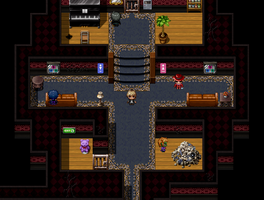 Welcome to the Life's Forfeit Walkthrough!

In here you will receive a step by step way to make sure you will complete the game with as little game overs as possible!

1. After you can move for the first time, head approximately 5 steps north of Ant's horse. You'll see that there's a hidden chest behind a tree. Open it and you'll find  a  Bike Chain Lock. It'll be useful for the first trap.

2. There's a small hidden social mechanic. If you exhaust dialogue with your friends any chance you get, it gives you a point. These points are collective. Here's when they can occur:

Immediately after the intro - Antwortet and Radcliffe: 2 total points available

This mechanic only affects you if you are trapped in the Prisoner's Dilemma room. Gaining at least 8 points will give you either the Trust Liked or Forsake Liked endings.

Additionally if you choose to ignore this, you can get the Trust Unliked and Forsake Unliked endings.

3. In the lobby, you can grab a Fake Orange. It's actually kind of useless and only gives comedic scenes (one of which leads to a game over) so if you're into that, by all means grab it.

You can also just end the game right now by interacting with the papers next to Birkin's book about 11 or so times. It'll prompt Shirley saying there's something under the worker's schedules. She'll see the waivers a little early and decide to leave with everyone. Neat, you already got .5 of the endings!

4. Okay moving on to the actual game, you should pay attention right here to when people go down the stairs because that's one of the answers to the second room. In case you missed it, the order is: David, Barin, Antwortet, Radcliffe, then Shirley.

5. There are two ways to solve the Collar room. The easiest way is if you got the Bike Chain Lock earlier. Using that will grant you a lot more time to unlock everyone since Shirley just grabs it real quickly.

The other way is to convince David to go. The order is like this:

> Tell David to do it

> Control David, go to the key as fast as you can

> He "dies" then you control Barin

> As Barin, quickly unlock everyone else

After this, you can just go to the gate as Barin then David will stand up and things will be alright.

6. In the second room, the keypad will ask if there's anything as sad as it is. You can probably tell the keypad is sort of blue, and blue is sort of associated with sadness. Therefore, you must find and count everything that is blue in that room. Shirley notes that the room doesn't count her and her party as they weren't considered before they entered. 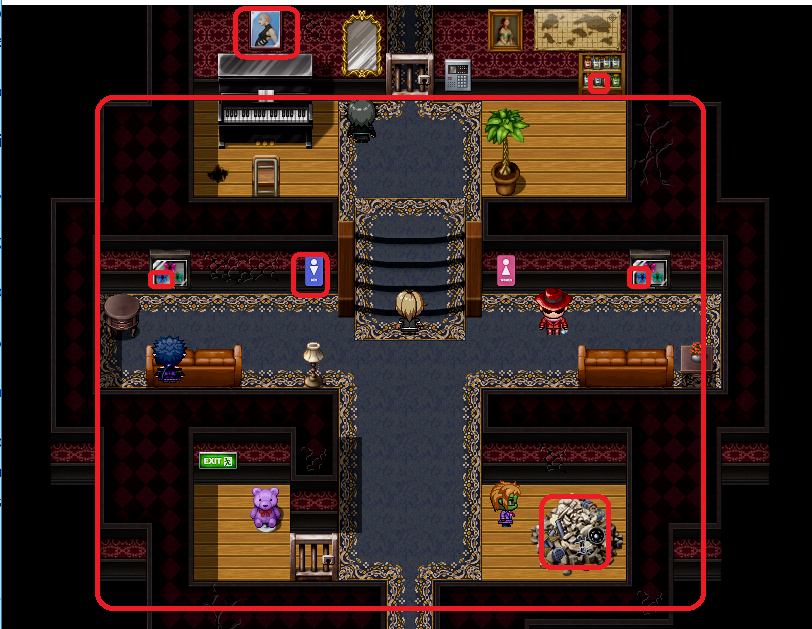 The blue items are: 2 butterflies, men's washroom sign, garbage pile, the painting, the potion, and the carpet.

7. After you enter that, it'll ask about Bearsy + his friends added to the number of victims eyes.

Talking to the bear in the now opened room will tell you he misses Bearsy and is lonely without Linda. 3 things are mentioned, so it gives you 3.

Shirley and her friends are the aforementioned victims. There are 5 of them, and they each have two eyes. That gives you 10.

Solving this will open the table next to Antwortet. Inside is a note that says N. N. W. S. N.

This basically solves the path to avoiding the Prisoner's Dilemma room, which I will explain once we're there.

8. Finally, the last question is the order of who went down first. The answer was given earlier, which is David, Barin, Antwortet, Radcliffe, then Shirley.

9. The Door trap's relatively easy. Just send anyone except David and you'll be okay. The door's blessed so that's why only David will die.

10. The next room will test how fast you can react. You must fight Birkin without ever catching your breath <she hints at this> so just always hit Fight. Make sure to do it as fast as you can! Alternatively, you can just spam X and you'll be okay.

11. The note that said N. N. W. S. N. is crucial in the next room, unless you want to get the various Trust/Forsake endings. So, recall the room you received the note from. From there, you go N (Up), into the Door trap. Then, you go N again into Birkin's room. Then, you go W (Left) and that is the room you're in now. Therefore, you must go S (Down) and then you'll be free. The next N after that is implied by the ladder in the "true' ending room.

12. Though if you're inside the Prisoner's Dilemma room, you get to pick which conclusion you get. If you've socialized with your friends, you can get the Trust Liked or Forsake Liked endings. If you've totally ignored them and just wanted the day to get over with, you can land the Trust Unliked or Forsake Unliked endings. They're all lots of fun in their own way! So, we've bumped off 4.5 endings already which leaves one more.

13. I actually technically gave the instructions for the last ending already, so yeah! You did! Woooooo!

A fun crisis designed for the whole family!